Painting Hutchuk or How I came to love the gorilla man.

I am a boring painter, I think anyone can see that in my slavish devotion to the studio colours of the
Privateer press miniatures. I honestly just really like the choices they make and for me it is very hard
to say “Lime green would be baller on Menoth Knights Exemplar”. I think over all there are tones and
schemes that work well for units that match their aesthetic. The question then becomes “Hey Conor,
why don’t you try to find one of these alternate schemes that work?” the answer my friend is I am
neither skilled enough nor motivated enough, in short I am lazy.

So to try and make up for a lack of pizzazz and joie de vivre in paint schemes I try to paint neat. It’s a
simple idea and I think it works well for me. I have never been any good at shading my miniatures so
I try to make up for it by keeping the miniature nice and neat. Oh sure I will try throwing in a object
source lighting effect here and there, maybe crack out the air brush for some glow effects (seriously
airbrushes let you cheat so easily with glow effects and even some blending/shading to) or
sometimes I will try going to town on the bases of the minis to (I think I am not alone in saying a
good base can make a mediocre paint job seem ten times better) but all in all I am a simple painter. I
like to think I get a nice balance of painting quality and turnaround for my painting. I have a personal
code of never playing a model un-painted and I stick to that as much as I can. I mean we will always
run into a model that just seems…so easy to paint or more that we feel that we can really commit to
adding a little more detail with a little more time. For me that has been Hutchuk.

First off the miniature is amazing. The body is the white resin/plastic that has been used for the
colossal and other miniatures by Privateer Press while his two heads( one with a gasmask up the
other with the gas mask down which is what I chose to have) and his two arms are the classic
Britannia metal. Scale wise he is huge! Easily up there with Khador’s butcher or the other Ogrun solo
the Ogrun Bokur. Everything about this model I love, his armour looks like something from a light
warjack with the tassets and quilted bases on his thighs and legs similar to those of the Steelhead
mercenaries which ties into his life as a mercenary in Ord and Llael. The spikes on his left pauldron
evoke the same on the Ogrun bokur which links him with his more traditional cousin. His gas mask
and helmet are a definitely inspired by world war one British infantry in their gas masks and Brody
helmets. He is covered in leather pouches, satchels and a nice bandolier of alchemical grenades
showing off that he isn’t just two hundred kilos of Ogrun but he has a brain as well. The one
detraction this miniature has is perhaps his mace. It looks like it was jury rigged in a jack workshop
from parts from a boiler and pump assembly but obviously that is what the modellers were going
for. Hutchuk is a modern day Ogrun merc. He grew up in the cosmopolitan Llael and his armour and
arms reflects that.

For me I had no problem assembling this miniature. I pinned his arms as a matter of course and
despite the right arm being a massive chunk of metal the model is surprisingly stable thanks to his
medium base. I base coated him with Vallejo Panzer grey a nice dark grey that is almost black but
gives still with a little light in it. As I usually do I worked out the colours I was going to use so I wasn’t
scrambling for them later. His armour plate is the classic traitor green, the buckles of his leather
gear, tassets, chainmail, boot caps and elements of his mace are shining steel, the leather straps and
pouches are either boostrap brown or rhinox hide base from Games workshop. His quilted skirt or
bases is simply hammerfall khaki. Finally I decided to try the very coppery screaming bell base paint
from Games workshop, this paint like the other metallic base colours offers really excellent coverage
and I think the colour is really excellent.

Hutchuk has tons of detail thanks to all his straps and pouches etc and honestly he was fun to paint.
After the aforementioned colours were laid down I gave the entire mini (honestly he is huge and
strays into the realm of an action figure for scale) with Seraphim Sepia shade from Games workshop.
This really gave a great tone shift to the coppery screaming bell and filled in the lines of the base’s
quilting. I then dry brushed the metals with either the shining steel or screaming bell to add some
high light before I finished the model by adding colour to the alchemical grenades. I chose to use
Cygnar base blue with some lothern base paint from Games workshop for some of the grenades and
for the others I used gnarls green with necrotite green to give the impression of some sort of volatile
alchemical mixtures.

Honestly that is it Hutchuk! Hutchuk in all his glory was a really fun miniature to paint and the detail
of the sculpt really lets a simple but neat paint scheme work to its potential. I love Hutchuk and I
have only used him on the table once and nowhere near to his full potential rules wise but I do feel I
have really stepped up when it comes to the painting. 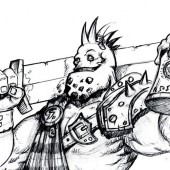 Craic is the out spoken troll figurehead of the Leinster Brigands Warmachine Gaming Club. He will keep you updated on the Brigands exploits as the rove around the land battling, drinking and abusing the natives